What's R-32?
R-32 is a next generation refrigerant that efficiently carries heat and has lower environmental impact.

Refrigerant is a medium for conveying heat.

Air conditioners transfer heat while circulating refrigerant between the indoor and outdoor units.

Although there are various types of refrigerants, R-32 is a new refrigerant currently receiving the most interest.
Because R-32 efficiently conveys heat, it can reduce electricity consumption up to approximately 10% compared to that of air conditioners using refrigerant R-22. Furthermore, compared to the refrigerants widely used today such as R-22 and R-410A, R-32 has a global warming potential (GWP) that is one-third lower and is remarkable for its low environmental impact. 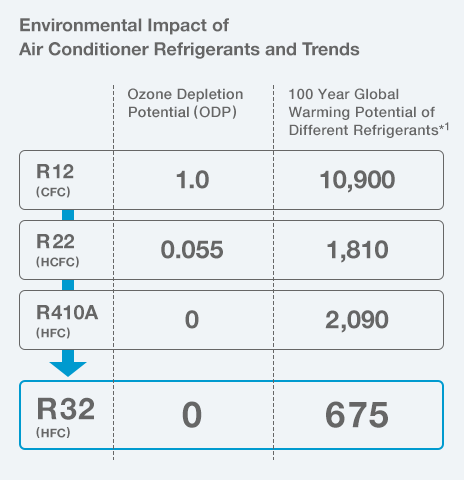 Various refrigerants have been used in air conditioners until now. Regulations have increasingly become stricter from greater consideration for the global environment because of the Montreal Protocol in 1987 and the Kyoto Protocol in 1997, resulting in a shift to refrigerants with even lower environmental impact.

Although the mainstream refrigerant R-410A has an ozone depletion potential (ODP) of 0, its global warming potential (GWP) still remains an issue.

While R-32 also has an ozone depletion potential of 0, the refrigerant has only approximately 1/3 of the GWP of R-410A. Consequently, investigation of this promising next generation refrigerant has increased.

However, because R-32 had been an extremely difficult refrigerant to handle, its use was not practical until now. Daikin became the world’s first company to succeed in applying R-32 to air conditioners by leveraging its expertise as the only manufacturer that develops and manufactures both air conditioners and refrigerants.

Currently, R-410A is the refrigerant most commonly used in developed countries. However, if all R-410A were converted to R-32, the impact to global warming from HFCs in 2030 would be reduced by the CO2 equivalent of approximately 800 million tons (19%) compared to the continued use of R-410A.*2

Cooperation with governments and international organizations has expanded technical assistance for emerging countries to each region and aims for widespread use of the refrigerant R-32 throughout the world. 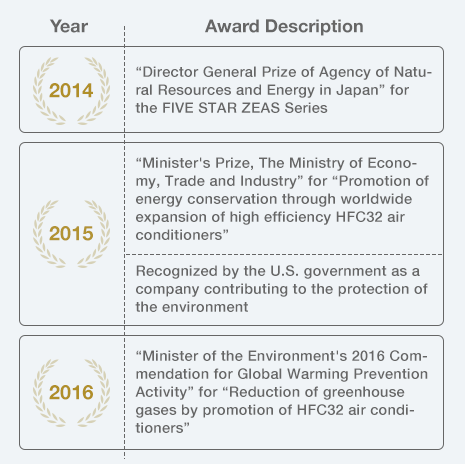 Aiming for widespread use throughout the world, Daikin not only manufactures and sells R-32, but it also provides technical assistance in emerging countries in cooperation with governments and international organizations.
In India, verification tests were conducted for inverter type R-32 air conditioners. In executing training for the proper handling of R-32, the technical level also improved. Consequently, Daikin has received requests from various governments, including the Thai and Malaysian governments, and the company is beginning to target local manufacturers for technical assistance for conversion to R-32.
Such efforts as those mentioned above have earned Daikin high acclaim and a variety of awards.

Daikin’s Policy on the Environmental Impact of the Refrigerant

Learn more about R-32 and Daikin’s Policy on the environmental impact of refrigerants.