"Forests for the Air" Project Underway in 7 Locations Worldwide

Daikin works together with international NGO Conservation International (CI) and the Shiretoko Nature Foundation in carrying out the "Forests for the Air" project in seven regions around the world. In Shiretoko (Japan), Indonesia, Brazil, Cambodia, India, China, and Liberia, Daikin employees, local governments, NGOs, and customers cooperate in efforts to help locals earn a livelihood while also protecting forests. The goal by 2024 is to protect forests covering some 11 million hectares and contribute to reducing 7 million tons CO2 emissions. Through forest protection, the project aims to solve social problems like poverty and contribute to achieving the Sustainable Development Goals (SDGs).

In July 2011, Daikin, the Shiretoko Nature Foundation, and the towns of Shari and Rausu signed an agreement to protect the wilderness of the Shiretoko Peninsula, a UNESCO World Natural Heritage Site. In 2016, the parties signed an agreement for the second phase of this effort as part of Daikin's "Forests for the Air" project, under which Daikin will provide donations and send volunteers for a period lasting until the end of March 2024. By supporting Shiretoko 100 Square-Meter Movement, providing environmental education, and helping ensure that the human and brown bear populations live in harmony, we are striving to preserve the forests of Shiretoko for future generations.

Through these activities, we hope to not only contribute to the revitalization of forest in Shiretoko, but also foster human resources who can take ownership of global environmental issues and take action by sharing the importance and significance of conserving the natural environment with many people.

In October 2021, nine employee volunteers carried out the activities, as well as a 10th year anniversary debriefing session was held. The session was attended by directors and employees representing Daikin, mayors and deputy mayors of Shari and Rausu towns, and university professors who are experts on forestation. The participants shared presentations on the progress at each town and evaluation of their forestation, and confirmed future directions. Protecting the Natural Environment of Shiretoko: People and Nature Living in Harmony

Working on Reforestation in Indonesia

Since June 2008, Daikin has been working with international NGO Conservation International (CI) on a reforestation project in Gunung Gede Pangrango National Park on Java Island in Indonesia to rejuvenate the forest and its ecosystems. This is part of Daikin's "Forests for the Air" project.

This national park is covered with valuable tropical forests that are home to many unique species designated as endangered. But in the last several decades, there has been rapid deforestation as social problems such as poverty have forced people to clear land for agriculture and cut down trees to support their lifestyle.

Toward solving this problem, Daikin is contributing to reforestation but also offering support to secure alternate livelihoods for residents to reduce their dependence on cutting down trees. So far under this project, about 150,000 trees (local species) were planted on about 300 hectares with the help of 644 local farmers and 20 national park rangers.

We have been supporting farming that utilizes the replanted areas (agroforestry), providing environmental education, and helping residents build a foundation for their lifestyles. We have also helped bring the natural gift of water and hydropower to households in these areas. Thanks to these efforts, residents can enjoy more convenience and sanitation, and better appreciate the importance of the forest, with the result that they are more eager to protect their natural resources.

In fiscal 2018, we received a letter of appreciation for our environmental and social contribution activities over the past decade from the government of Indonesia. The letter recognizes our contributions to the revitalization of forest that serves as a water source for Indonesia's capital of Jakarta as well as our contributions to solving social issues faced by local communities, such as poverty and education.

Through forest conservation activities like this, Daikin is contributing to the achievement of SDGs by helping solve social problems such as poverty. 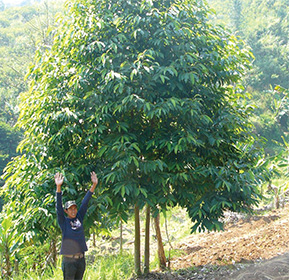 The seedlings planted have grown into trees
©Conservation International, Photo by Anton Ario Helping create a livelihood for local farmers: Preparing cucumbers grown in the planted forest to be sold in the market
©Conservation International, Photo by Anton Ario 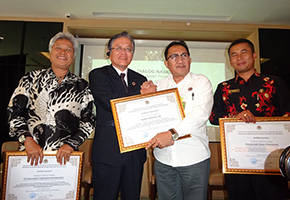 Letter of appreciation received from Indonesia's Ministry of Environment and Forestry

A decade of change at Gunung Gede Pangrango National Park

The reforestation project allows Daikin customers to contribute to reforestation while they enjoy operating their air conditioners in an energy efficient way.

Each time a customer in Japan pushes the "Comfortable eco-operation" button on the remote control of Daikin's Urusara (R-Series) residential air conditioner, an illustration of a tree on the remote control's screen grows a little bigger. When the tree becomes full grown (when 10 points are accumulated), the customer contributes to tree-planting activities and his or her name is listed as one of the supporters at a site of a reforestation project.

In fiscal 2021, 215 customers have registered in the project. 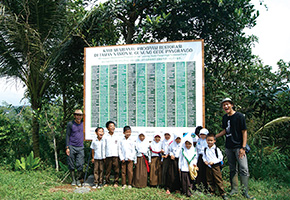 The board shows the names of Daikin customers who support reforestation