Daikin believes it is our people who make us competitive. A company can only grow stronger by having a diverse range of employees working within an organization that is conducive to mutual understanding of one another's distinct values and that allows everyone to shoot for a lofty goal.

Our Group Conduct Guidelines state that while respecting diverse values and approaches to work, we shall mutually accept our respective differences, act in harmony, gather the abilities we possess, and strive to be a Group in which each member expresses his or her ambitions and then takes bold actions with great passion and perseverance to realize those ambitions.

Based on this philosophy, we strive for diverse management in which we maximize the talents of all people, regardless of their nationalities, ages, genders, sexual orientation, gender identity, or disability. This goes for both periodically hired employees and career hires.

As we expand our business globally, the diversity of the Daikin Group’s workforce has increased with every passing year. Our diversity management combines such diverse personnel and harnesses their individuality and strengths into the combined capabilities of the Group. We believe that the biggest strength of the Daikin Group lies in its more than 80,000 employees representing over 170 countries around the world.

10. Respect for Human Rights and Diversity

We shall respect the human rights of each and every employee and shall not engage in conduct that discriminates on the basis of nationality, race, ethnicity, religion, color of skin, age, gender, sexual orientation, or disability. Diversity in individual values is enthusiastically accepted, and we shall work to make the unique talents and abilities of each and every person the driving force of the organization.

*
Includes employees on loan.
Note:
Figures as of fiscal year-end.

*
Figures as of fiscal year-end.

Number of Employees by Gender and Employment Rate of Women*

*
Figures as of fiscal year-end.

Maximizing the Talents of Women

Accelerating Efforts to Maximize the Talents of Women

Daikin Industries, Ltd. considers diversity management as one of the pillars that supports management and is undertaking projects that are directly under top management since 2011 with a focus on promoting women’s participation and advancement at work.

In fiscal 2020, we formulated an action plan to promote women's advancement based on the Act on Promotion of Women’s Participation and Advancement in the Workplace. In addition, we have established the following targets and expanded on efforts including reinvention of the thinking of managers and female employees, early cultivation of female leaders, support for early return from childcare leave, and encouragement of male employees to participate in childcare.

In fiscal 2021, we conducted training for young female leaders, which involved five group training sessions and online sessions held between September 2021 and May 2022. In addition, we also provided training to the supervisors of those trainees. This provided an opportunity for 20 female employees with the skill sets to become managers in the future to recognize their own strengths and weaknesses as well as identify their ideal image of a leader. This also served as an opportunity for the trainees to modify their approaches and actions to enhance their influence as leaders in a group.

As a diversity promotion project in collaboration with Osaka University, we have been conducting the "Innovative Women's Active Participation Program" for female employees in the skilled and technical areas since 2019 with the aim of cultivating more technical managers and leaders. In fiscal 2021, 14 female employees in the skilled and technical fields underwent lectures at Osaka University over four days from October to November. This provided an opportunity for our employees to learn about leadership theory and future design studies with female engineers from other companies and female graduate students at Osaka University, and expand their horizons as engineers.

We are expanding on programs to support balance between work and childcare, and above all, support measures to bridge the gap between childbirth and childcare so as to help employees continue their career. There is a growing number of employees actively participating at work while maintaining a balance between childcare and career through use of such systems and collaborating with their partner at home. As a result, the number of people returning from under one year of childcare leave has grown from 30% in 2011 to 60% at the end of March 2022.

Furthermore, the ratio of female managers in main overseas business sites outside of Japan is over 20%.

Daikin Industries Ltd. was awarded the Grand Prize in the NIKKEI Smart Work Awards 2022, which recognizes leading companies that aim for growth through work style reform.

Daikin received the highest ranking of S++ in three categories: Human Resources Placement, Innovation, and Market Expansion, and received the highest rating, 5 stars, in the overall ranking for the fifth consecutive year (deviation value of 70 and above), in the 5th NIKKEI Smart Work survey conducted by Nikkei Inc. In the category of Human Resources Placement, Daikin was recognized for its investment in fostering human resources in the DX field, promotion of female and experienced employees’ advancement, and expanded the re-employment system up to age 70.

Starting in fiscal 2013, we began our proactive policy of hiring more women for all positions in technical, skilled, and clerical fields, and focused on hiring new graduates with the determination and drive for long-term career. As a result, the percentage of women hired accounted for more than 30% of all new graduates hired for the seventh consecutive year.

In fiscal 2015, we began collaborating with universities to hold lectures, round-table discussions, and factory tours, which helped female high school and university students who aspire to become engineers to think about their careers.

Number of Hires and Ratio of Women (Daikin Industries, Ltd. only) 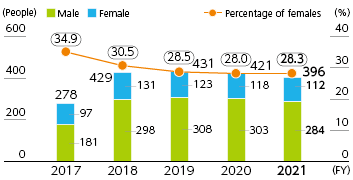 As Daikin promotes globalized business management, we are promoting more employees at overseas bases to managerial positions at their bases. We have the Global Daikin Leadership Development Program for locally hired managers at worldwide bases in order to give them the capabilities to run Daikin subsidiaries in their own countries.

As of the end of September in fiscal 2021, local nationals accounted for 45% of the presidents and 44% of the directors at overseas Daikin bases.

At the same time, outstanding personnel hired at overseas bases are being chosen and trained for positions as officers at Daikin Industries, Ltd. (Group head office).

We will continuously implement various efforts, including following up individually with each foreign national employee.

Employment of People with Disabilities

In 1993, based on the Act on Employment Promotion etc. of Persons with Disabilities, Daikin Industries, Ltd. established Daikin Sunrise Settsu Co., Ltd. (DSS), a cooperative venture with the Osaka Prefecture and Settsu City governments.

DSS strives to provide these people with an environment conducive to working so that they have the opportunity to make the most of their talents.
For the Daikin Group in Japan, we have established a target to achieve an employment rate of persons with disabilities of 2.5%, which exceeds the legally stipulated ratio of 2.3%. As of the end of fiscal 2021, 2.60% of workers at the Daikin Group are disabled, a percentage above the legal requirement. 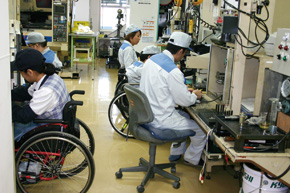 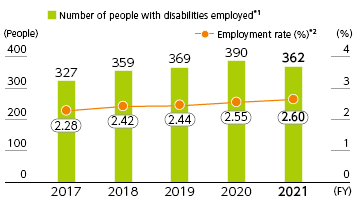 Daikin Industries, Ltd. has been a pioneer in promoting employment of seniors as it sees the utilization of experienced workers as an important theme with the ongoing declining birthrate and aging population. We introduced the system for rehiring employees 60 years of age and older in 1991 which keeps those who desire to work until age 63. In 2001, the age limit of this program was further raised to 65 years old.

We once again amended the rehiring system in April 2021, which enables employees to continue working until age 70 if desired. While the Law Concerning Stabilization of Employment of Older Persons that was amended in April is obliging companies to make an effort to employ workers up to age 70, we have taken a lead in the future obligation to ensure employment opportunities up to age 70.
Furthermore, we have revised the conventional compensation scheme to reflect better allocation of wages and bonuses, as well as established four levels of evaluation rank resulting in our new evaluation system that can reward employees in detail according to their results.

In addition, we also hire contract employees who are age 70 or above and possess highly specialized know-how, skills, expertise, network connection, and experience, and who carry on duties that are difficult to replace by others.

We recognize that as our business expands globally, we must take on challenges under many themes as a unity between young, mid-career, and highly experienced employees. Each year, we re-employ over 100 highly experienced workers and leverage their advanced skills and know-how through their active participation at our business sites in Japan and overseas.

We strive to continuously cultivate a company culture that enables employees to thrive regardless of their age and harness the skills of highly experienced employees more than ever before in order to improve the organization's performance. 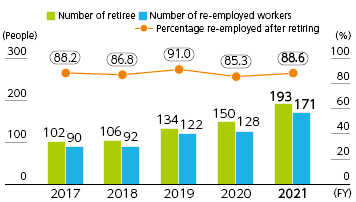 Daikin aims to create workplaces conducive to working for all employees, regardless of things like nationality and gender.
Daikin Industries, Ltd. has clearly established definitions of human resource rules on marriage and gender to recognize things like common-law marriage (including same sex partners) and gender identity (what gender a person identifies himself or herself as). We are also promoting understanding of the LGBT* community through holding training and releasing information via newsletters.

Efforts in the hiring process

Daikin's Group Conduct Guidelines states we shall respect the human rights of each and every employee and shall not engage in conduct that discriminates on the basis of nationality, race, ethnicity, religion, color of skin, age, gender, sexual orientation, or disability. We are taking the same measures in our hiring process to respect each individual's diversity and prevent discrimination.

For example, Daikin Industries, Ltd. no longer requires job applicants to indicate gender and nationality nor include a portrait on the entry sheet and resume. In addition, we are conducting thorough education among employees involved in hiring to prevent discrimination.