As a manufacturer of air conditioners doing business globally, Daikin makes it its mission to reduce energy consumption in order to provide people with safe and comfortable air and contribute to reducing global warming. To this end, we conduct quantitative environmental assessments for each product life cycle in order to develop products and services that use minimal electricity and to combine these in order to optimize the overall energy consumption of buildings.

We assess global warming impact of air conditioners using the life cycle assessment (LCA) method, which allows us to determine the environmental impact at each stage of a product's life cycle.

In the life cycle of an air conditioner, the majority of the greenhouse gas that is emitted occurs during product use stage, and refrigerants also represent a large impact. That is why we focus on reducing the impact of these two. In addition to incorporating inverter technology to reduce power consumption, we employ R-32, a refrigerant with low global warming potential, to achieve greater energy efficiency. In fiscal 2020, we reduced CO2 emissions from residential air conditioners by 19% and from commercial air conditioners by 26% compared to life cycle CO2 emissions 10 years earlier.

Sample of LCA: Comparison of CO2 Emissions over Product Lifecycle*1 In the life cycle of an air conditioner, from design and manufacture to use and disposal, the majority of the CO2 that is emitted occurs during product use. That is why when we revised our voluntary environmental standards, we tightened our criteria for energy efficiency in the product use stage in order to improve the energy efficiency of products.

In April 2020, we released an 8hp/10hp class EcoZEAS air conditioner with greater energy efficiency performance under the SkyAir series of air conditioners for shops and small offices.

The model uses R-32 refrigerant with low global warming potential and also reduces the amount of refrigerant it uses. In addition, it features a high efficiency swing inverter compressor that reduces energy consumption during operation, improving APF by 17% compared to existing models.

Additionally, the BS unit for VRV models for North America switches from a parallel type to a direct type. This helps to reduce CO2 emissions across the entire life cycle of air conditioning system, rather than just the individual unit.

In August of the same year, we released the GREEN Multi-Split which is the first air conditioner for commercial buildings in the industry to adopt R-32 refrigerant with a low global warming potential. This product's global warming potential (GWP) multiplied by refrigerant quantity is around 79% lower than the average for models using the conventional R-410A refrigerant from 2011 to 2013. This amount achieves the Kigali Amendment target for 2029.

We released the new model of VRV X in April 2020. We increased surface area by grooving the refrigerant flow path of the microchannel heat exchanger. This further improves the heat exchange efficiency, making VRV X top of the industry in the field of multi-split type air conditioners for commercial buildings in terms of energy saving performance*. Moreover, the structure of the outdoor unit on VRV X has been improved, making it more resistant to heat waves, earthquakes and typhoons that have occurred frequently in recent years.

Structure of heat exchanger adopted for use in VRV X

The Retrofit Maintenance Plan that Daikin has come up with is a service that reduces energy consumption from existing multi-split air conditioners for commercial buildings. This service earned the Minister's Prize of the Ministry of Economy, Trade and Industry in the product and business model category of the fiscal 2016 Energy Conservation Grand Prize.

The Retrofit System entails replacing parts in the control panel, the air conditioner's brain, and the compressor, the machine's heart, and reducing power consumption by 13% a year. The replacement parts used with the system weigh less than one-third those normally used in upgrading VRV multi-split type air conditioners for commercial buildings, thereby it also contributes to saving resources.

Since the start of the service, we have been expanding the service application to include more models. In fiscal 2020, we added four series to the service lineup. We plan to further expand to include air conditioners featuring cooling-heating-free system, which enables simultaneous cooling and heating operation, in fiscal 2021.

Venti-air, an exposed installation type of total heat exchanger unit, is a commercial ventilation equipment that can be used in small spaces. It is equipped with a built-in energy recovery apparatus to prevent cool or hot air to escape from indoors, and achieves efficient ventilation without compromising the energy efficiency. In comparison to installation of a general ventilation equipment, this product is capable of reducing 26% of the increased power consumption.* The energy saving performance and ease of retrofit installation on an existing building has earned the product the Chairman Prize of Energy Conservation Center, Japan, in the product and business model of the fiscal 2020 Energy Conservation Grand Prize.

The design is also familiar to the interior of cafes and shops, making it easy for store to adopt the exposed installation type model, as well as giving rise to having conversation with customers on ventilation.

*
Surveyed by Daikin, as a comparison to common ventilation equipment (250 m3/h) in a small sized store of 25 m2 to meet the recommendation of 30 m3/h/person by the Ministry of Health, Labour and Welfare. Requiring no water drainage or supply pipes, DESICA instead uses outside air to control humidity, either humidifying or dehumidifying. Equipped with the Hybrid DESICA Element, which contains both highly efficient water absorption material and a heat exchanger, it consumes just one-sixth the energy of conventional humidity controlling devices (according to Daikin tests).

In autumn 2012, Daikin Industries, Ltd. released the DESICA HOME AIR for detached homes, which controls humidity and ventilation throughout the entire house. Just one unit offers round-the-clock, year-round comfort control for all rooms in homes with floor space of between 120 m2 and 200 m2. Like the commercial DESICA, this product gives humidifying and dehumidifying without the need for water drainage or supply pipes. Because it is floor standing, maintenance such as replacement and cleaning of the high-performance filter is easy. With its ability to provide high-quality air and energy efficiency, the DESICA HOME AIR has already proved a hit in many homes.

Customers achieve the best balance of temperature and humidity by choosing a product and combination of parts from the extensive lineup. 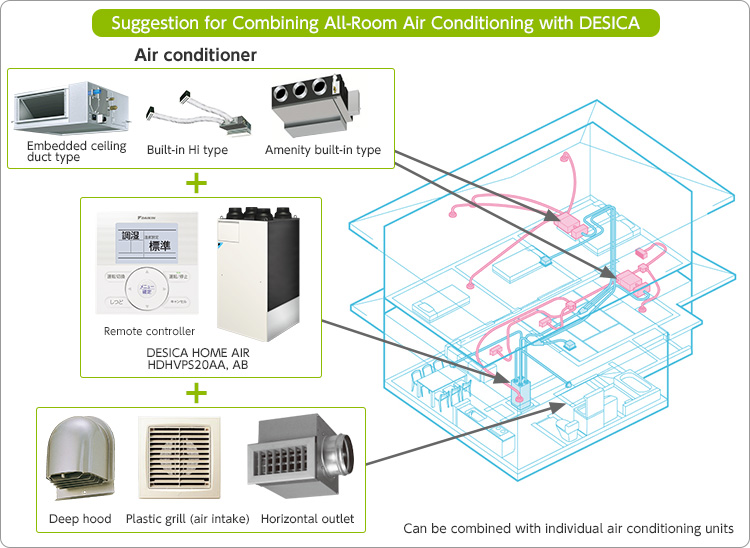 Daikin revamped the full model of small-medium air-cooled chillers with 8–30 horsepower, and released new products that use R-32 refrigerant with a low global warming potential in February 2021. Daikin is the first company in the industry to launch products in the same horsepower class using R-32.

In addition to adopting R-32 that have a lower global warming potential (GWP) compared to the conventional R410A refrigerant, we also drastically reduced the amount of refrigerant charge with our all aluminum microchannel heat exchangers, making our products top class in the industry in terms of both environmental and energy performance.

As the first company in Japan to launch air-cooled small- to mid-sized chillers using R-32 which are in high demand in factories, we are contributing to reducing environmental impact and promoting energy conservation through industrial application. This product can be combined with a compact air handling unit to improve ventilation volume, which has a growing need in the central air conditioner market amid the COVID-19 pandemic.

The Urusara XA Series and DX Series of energy efficient residential air conditioners released in November 2019 are products that have been awarded the Chairman Prize of Energy Conservation Center, Japan, in the products and business model category of the fiscal 2019 Energy Conservation Grand Prize.

In the recently increasing number of energy efficient homes with large amounts of insulation, a reduced burden is placed on air conditioners because of these homes are less susceptible to the effects of outside air temperature, which makes the compressors operate at low speeds for longer hours. The air conditioners that were awarded on this occasion feature a proprietary compressor that is highly efficient even at low-speed operation. They reduce primary energy consumption by as much as 13%. Energy efficient homes have faced the challenge of being too cold during the summer because of excessive air conditioning and the feeling of cold air being released during heating in the winter. These issues have been resolved with evolved dehumidification and air flow control functions.