Daikin emits two kinds of greenhouse gases during development and production processes: CO2 from energy use, and fluorocarbons. We have set goals for reducing greenhouse gas emissions during the product development and production processes in fiscal 2020 by 70% and in fiscal 2025 by 75% in comparison to fiscal 2005. We reached our Environmental Action Plan 2020 goal with greenhouse gas emissions in fiscal 2020 of 1.08 million tons-CO2 (79% reduction compared to fiscal 2005). As an energy initiative, we purchased green electricity at Goodman Manufacturing Company, L.P. in the U.S. and installed a 5 MW sized solar power generation system at Daikin Tukey A.S.

In addition, regarding fluorocarbons, we have introduced couplers (joints) with less leakage when charging refrigerants in air conditioners in Japan in fiscal 2020. 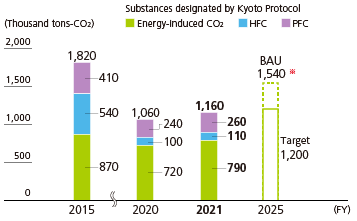 Greenhouse gases as major cause of global warming, CO2, CH4, N2O, and four fluorinated gases (HFCs, PFCs, SF6, and NF3), are subject to regulation based on the Kyoto Protocol.

CO2 Emissions per Production Unit Dropped by 14% Against Standard Value

The Daikin Group as a whole is taking a systematic approach to reduce energy-induced CO2 by improving energy efficiency during development and production processes.

In fiscal 2020, CO2 emissions per production unit dropped 14% against the standard value. Following from the previous fiscal year we have continued to visualize energy usage at each location, minimize use, and improve low pressured compressed air in fiscal 2020.

Daikin Industries, Ltd. set a goal of decreasing CO2 emissions (per sales) from transportation by 5% by fiscal 2020 compared to fiscal 2015 by switching from trucks to trains and ferries. We also increased the use of direct shipping from overseas production sites to places of consumption in Japan to ensure the shortest possible transportation route.

In fiscal 2020, we also introduced transportation by railway for the return trip from Tokyo to Kansai. This initiative to utilize roundtrip travels is also recognized by the Ministry of Land, Infrastructure, Transport and Tourism's Promotion of Modal Shift-Intermodal Transportation.

Reducing Other Environmental Impact during Transportation

Daikin is working to expand the use of renewable energy such as solar, wind, and hydro powers.

In fiscal 2015, we installed tracking solar panels at the Technology and Innovation Center (TIC), Daikin's R&D base, which helped the solar power system generate 7,230 MWh a year at development and production bases in Japan and overseas. This is equivalent to CO2 emission reductions of approximately 4,000 tons-CO2 (estimated by Daikin).

Moreover, in Europe, where governments using EU directives on renewable energy like solar, wind, and hydro powers, we are aiming to have renewable energy account for 20% of the energy mix by 2020. We have introduced green electricity to power factories and offices at Daikin Europe N.V., AAF (UK), Daikin Device Czech Republic s.r.o., and Daikin Applied Europe.

Going forward, we will continue to implement the use of renewable energy globally. 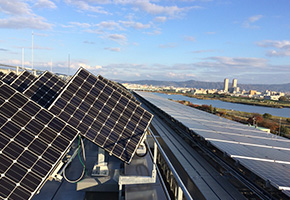