Working Toward Practical Application of Diversity of Next-Generation Refrigerants

The refrigerant conveys the heat between the indoor unit and the outdoor unit of air conditioners. Although HFC, currently the most widely used refrigerant in developed countries, has zero ozone depletion potential, it contributes to global warming if released into the atmosphere.

Different characteristics are required of refrigerants, depending on whether they are used in, for example, residential or commercial air conditioners, water and space heaters, or refrigeration equipment. That is why we have spent years conducting research that will enable the selection of refrigerant that is ideal for each application. We have so far conducted research on next-generation refrigerants such as natural refrigerants and HFC refrigerants, and have considered their application in products.

Using the knowledge we have built up, we are providing information worldwide at events such as international conferences, academic conferences, and exhibitions, as well as through research paper presentations, on the global warming impact of refrigerants and measures against it. Note:
Other refrigerants not listed above are also applied in products outside of Daikin's portfolio

Focusing on Converting to Alternative Refrigerants and Recovering Fluorocarbons

HCFCs used to be the most commonly used refrigerant, but in the 1980s experts suspected it was depleting the ozone layer, so under the Montreal Protocol developed nations agreed to phase out its production in developed countries by 2020. Daikin's chemicals business has for years worked to mitigate ozone layer destruction by developing alternative refrigerants that do not deplete the ozone layer. In 1991 we began the first mass-production in Japan of HFC, a refrigerant with zero ozone depletion potential, and in 1995, under our air conditioner business we developed and began selling air conditioners that use HFC as the refrigerant.

Daikin's Action on Refrigerant and Goals 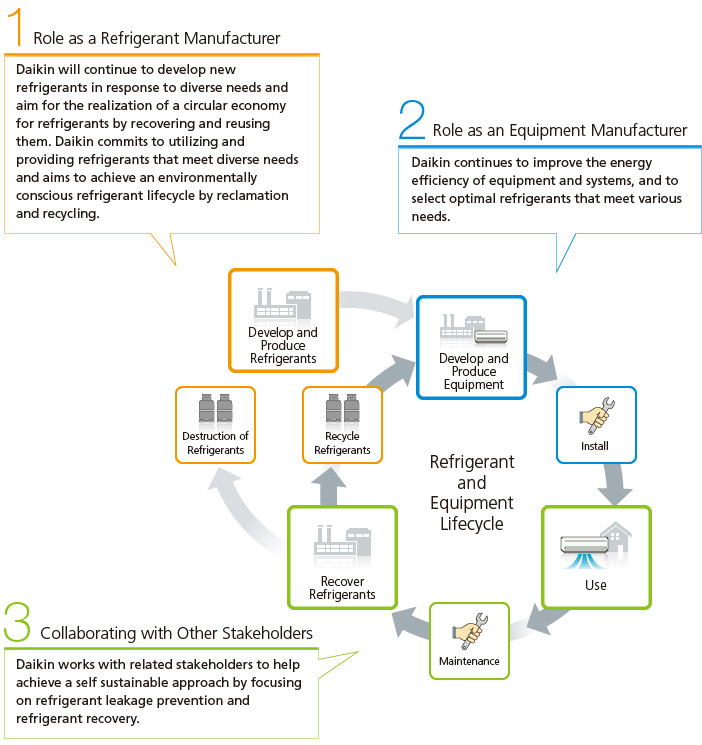 In October 2016, at the 28th Meeting of the Parties to the Montreal Protocol, members voted to phase down the CO2 equivalent total of HFCs, which, despite not harming the ozone layer, have a high GWP. With this, HFCs, which were covered by the Paris Agreement adopted at the 21st Session of the Conference of the Parties to the United Nations Framework Convention on Climate Change (COP21) but were not part of the Montreal Protocol, thus became part of the Montreal Protocol, due to the success of efforts to completely eliminate HCFCs. There is also a regulation on the CO2 equivalent total of production and consumption of HFCs. This decision is called the Kigali Amendment, after the Kigali, the capital city of Rwanda, where the conference was held. The Amendment had exceeded the threshold for ratification by at least 20 countries at the end of 2017, thus it came into effect on January 1, 2019.

A major point of the Kigali Amendment is that it is not meant to phase out HFCs but rather phase down the production and consumption of HFCs based on their GWP value. The amount of HFC will not be restricted but rather reduced in terms of total GWP of CO2 equivalent (weight of HFC in Kg x GWP value). By using lower GWP HFCs, it is possible to maintain or increase the use amount of HFC itself while reducing the overall global warming impact. In enacting the Kigali Amendment, developed countries are implementing reductions based on the common phase-down schedule starting in 2019. The Amendment divides developing countries into three groups, which plan to implement reductions individually.

Upon the introduction of new refrigerants, the Amendment requires an increase in efficiency of air conditioners in addition to a phasing down of HFCs in terms of total GWP.

Daikin is pursuing the following measures in response to the Kigali Amendment.

Promoting the Use of R-32, a Refrigerant with Lower Global Warming Potential

In addition, Daikin provides technical support in emerging countries by cooperating with governments and international organizations throughout the world and provides information and technical support through international conferences, academic conferences, and papers on the impact and countermeasures in relation to refrigerants and global warming. For example, in India, Thailand, and Malaysia, seminars were held for government officials and air-conditioning industry groups to promote understanding of R-32, and we conducted training for local air-conditioning installation and service technicians on the appropriate handling of R-32. In Mexico and Brazil, Daikin was commissioned by the Japan International Cooperation Agency (JICA) to handle private-sector technology promotion projects in an expanded range of activities, including the distribution of air conditioners with R-32 refrigerant and initiatives to create energy-efficient markets.

Daikin has made 93 applied patents for R-32 air conditioners related to the manufacture and sale available to the world because it believes low global warming potential R-32 is overall the optimal refrigerant for today's residential and commercial air conditioners. In July 2019, we made a non-assertion pledge to offer free access to around 180 patents in order to further promote the spread of R-32. In July 2021, this pledge was further extended to include 123 more patents.

Moreover, in December 2019 we participated in WIPO GREEN* and registered these patents in WIPO GREEN's database in March 2020. By promoting the quick spread of R-32 through our participation in this mechanism that encourages technology sharing and mutual utilization by introducing sustainable technologies broadly to the world, we will help to mitigate environmental impact of refrigerants around the world.

*
One organization of the UN's World Intellectual Property Organization (WIPO) with the mission to speed up the adoption of solutions for environmental issues.

System for Recovery, Recycling and Destruction of Refrigerants

As a responsible manufacturer of air conditioners and refrigerants, Daikin engages in activities to prevent the discharge of refrigerants into the atmosphere during the product lifecycle.

Daikin has established three routes: simple recycling that removes impurities such as oil and water based on the quality condition of the recovered refrigerant, full-scale reclaiming that breaks the refrigerant down by component and then readjusts components at a plant to reclaim the quality as good as that of virgin refrigerant, and destruction for refrigerant that cannot be recycled. In the process of establishing these routes, Daikin Europe N.V. cooperated with A-Gas, a company based in the U.K. that recovers and reclaims refrigerant, and released simple recycling equipment under the Daikin brand in fiscal 2019. Daikin Refrigerants Europe GmbH owns a destruction plant in Germany and began operating a reclamation plant there, too. By utilizing this scheme, in fiscal 2019, Daikin Europe N.V. commenced sales of VRV L∞P by Daikin air conditioners that use reclaimed refrigerant.

Going forward, Daikin will continue to implement efforts to widely permeate this scheme in Europe.

Main progress and results in fiscal 2020 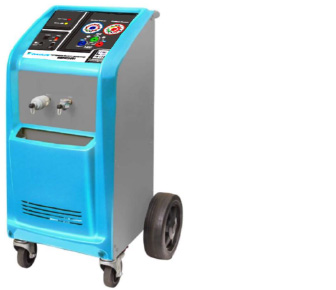 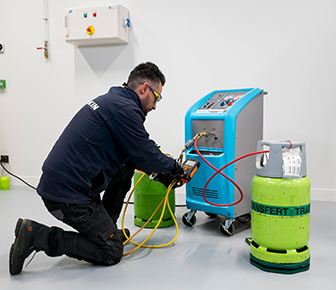 CO2 Conveni-Pack uses CO2 refrigerant with a global warming potential of 1 in place of the conventional R-410A refrigerant. In January 2020, Daikin began demonstration testing of CO2 Conveni-Pack using a subsidy* from the EU. The testing will cover a three-year plan and involve verifying the safety and efficiency of the system after steadily rolling it out at retail shops in Belgium, Germany and Spain.

*
Projects approved for the LIFE Programme implemented by the EU for the environment and climate action receive a subsidy to defray 55% of the their costs.