Creating Standards for a Decarbonized Society Alongside Stakeholders

In its May 2018 report The Future of Cooling, the International Energy Agency (IEA) pointed out that reducing CO2 emissions derived from electricity use as demand for air conditioning rises will require not only the adoption of renewable energy, but also the adoption of energy efficient air conditioners.

Forecast of CO2 Emissions from Space Cooling in 2050 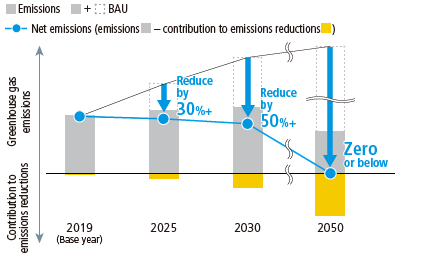 Note:
Graph figures compiled by Daikin based on IEA The Future of Cooling.

From before the IEA's recommendation, Daikin has proposed highly energy efficient inverter air conditioners in emerging countries such as India and ASEAN where demand for electricity is predicted to rise.

We are also working to develop standards for promoting energy efficiency together with various stakeholders. This is because some emerging countries still need to improve energy efficiency standards. Many air conditioners that consume large amounts of electricity during operation are sold in such countries, becoming a factor for energy issues.

As one example, in India, Daikin provided technical assistance for the calculation method of seasonal energy efficiency ratio to government institutions, which led to the introduction of an energy labeling system. As a result, consumers became aware of the energy efficiency performance of inverter air conditioners with optimal operation based on ambient temperature, which has helped to reduce electricity demand.

In July 2020, energy efficiency standards for air conditioners were revised in Brazil. This was the result of a taskforce collaboration among JICA, local universities, Daikin and other organizations.

Despite concerns over electricity shortages caused by economic growth, air conditioners that are inexpensive and consume large amounts of electricity are popular in Brazil. This is because it was practically impossible for consumers to tell the difference between the superiority or inferiority of energy efficiency performance under the conventional standard. Some 90% of the products on the market were categorized as the highest ranking under the country's energy efficiency standards, which had not been revised in many years.

In January 2018, Daikin, together with local universities and NGOs, commenced a demonstration test in order to identify the differences in performance. The results showed that inverter air conditioners can lower energy consumption by around 60%.

In March 2018, the Japan International Cooperation Agency (JICA) adopted this project as a Public-Private Partnership Program, opening the door to collaboration with the government of Japan. Daikin approached the government of Brazil about the need to revise its standards together with the Embassy of Japan in Brazil and the Ministry of Economy, Trade and Industry, and other actors, presenting the results of the demonstration test. This project included visits to Japan and technical instruction. Repeated workshops for discussions on issues and countermeasures were also organized. These activities, which lasted around two years, resulted in the introduction of new energy labels by the government of Brazil.

Achieving a Decarbonized Society through Partnerships

Air conditioners are vital to the lives of many people around the world, but they also impact climate change because they consume a large amount of electricity. This is why Daikin is addressing the development and adoption of energy efficient products around the world. It is important that we aim to reach our goal in our Environmental Vision of reducing greenhouse gas emissions to net zero by 2050.

Looking ahead, Daikin will continue to provide information and technical assistance around the world utilizing its expertise. We will work with various stakeholders to build sustainable systems not only for our own company but for markets and the environment to contribute to the realization of a decarbonized society.

The JICA project in Brazil was key for the recent improvements promoted in energy efficiency policies. The project organized a technical visit to Japan, as well as demonstration testing to identify the significant energy efficiency of inverter and low GWP refrigerants air conditioners. These made the difference for public policies improvement in Brazil.