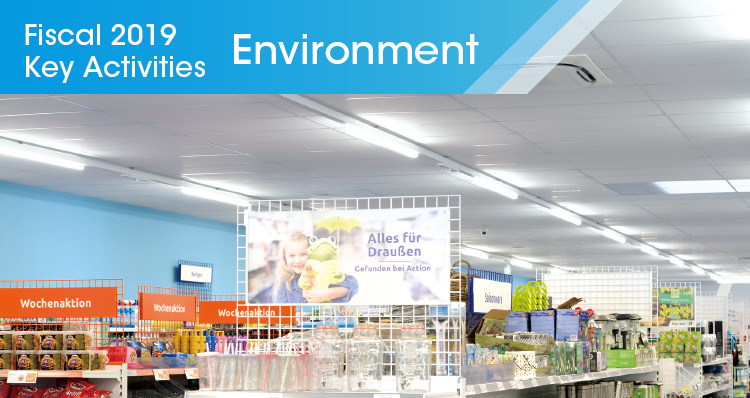 The EU is taking regulatory action (F-gas Regulation)*1 to control the total consumption of HFC refrigerants in order to reduce global warming due to fluorocarbons.

*1
The EU F-gas Regulation aims to reduce the total consumption of HFCs (global warming impact conversion of production volume + import volume - export volume) in stages.
*2
Compiled by Daikin based on the market demand data by the Japan Refrigeration and Air Conditioning Industry Association.

In anticipation of tighter regulation on total consumption volume, Daikin launched the service in Europe for the circular use of refrigerants. Based on the philosophy of a circular economy, we aim to shift from linear use of products that are manufactured, consumed, and disposed to a model of continuous recovery and reuse of resources.

Currently, when air conditioners are disposed of, refrigerants inside them are destroyed following recovery. However, refrigerants can be reused repeatedly by removing impurities. Such circular use reduces the amount of new refrigerants being brought to market.

Daikin has established a refrigerant reclamation facility in Germany, harnessing its expertise in air conditioning and chemicals. At the same time, we are working with A-GAS, a UK-based company that recovers and reclaims refrigerants. Following this established route, in June 2019, Daikin launched sales of the multi-split type air conditioner VRV L∞P by Daikin for commercial buildings, which utilizes reclaimed refrigerants.

We sold 14,000 units of VRV L∞P by Daikin in the first 10 months since its release. As a result, the amount of new refrigerants being used in multi-split type air conditioners for commercial buildings that Daikin sells in Europe has been reduced by about 40%.

To further promote the circular use of refrigerants, Daikin offers a combined service where refrigerant recovery from used air conditioners is offered together with VRV L∞P by Daikin sales to major customers as they replace their air conditioners. To reassure customers with concerns over future refrigerant shortages, we offer to temporarily store recovered refrigerants and guarantee their required refrigerants will be in stock at the time of maintenance. This service offers a solution that ensures recovered refrigerants are reclaimed and put back into circular use as resources. This service has already seen sales increase in the Netherlands after gaining popularity among environmentally conscious customers.

In the Netherlands, the service was adopted by Action, which operates retail store chains in Europe. Used refrigerants are gradually being recovered from stores undergoing renovation, while VRV L∞P by Daikin units are installed in new stores. To date, recovery has been completed at 12 stores operated by the company, with 30 more scheduled. Going forward, Daikin will be expanding the service area to other European countries. Although refrigerant recovery assuming final destruction and disposal is mandatory in Japan and Europe, the rate of recovery has yet to grow markedly.

To boost the recovery rate, it is crucial that society shares the notion of the critical need for recovering and reusing refrigerants for the future. Additionally, collaboration and partnerships with the government and industry are essential in order to establish economically viable systems in each region. Daikin is working with their partners to make a circular ecosystem of refrigerants a reality and promote the practice outward from Europe to the rest of the world.

Establishing a Circular Economy for Refrigerants within Our Store Network

We are further mitigating our company's impact on the environment by recycling and reusing refrigerants instead of disposing of them and increasing waste.