Reasons that Daikin Addresses the Environmental Impact of Refrigerants

Q. Why does Daikin do that?

A. Addressing the environmental impact of refrigerants is essential for Daikin as a manufacturer of both equipment and refrigerants.

Air conditioners make people's lives more comfortable and productive, but we cannot overlook their contribution to climate change through hydrofluorocarbon refrigerants and energy consumption. Global warming is expected to become a growing problem especially in the economically emerging countries where air conditioner demand is on the rise. 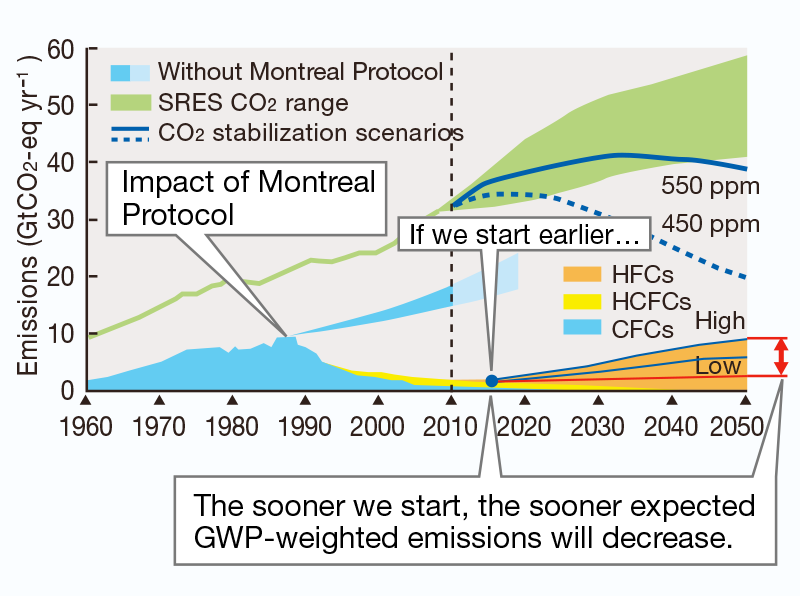 1.
To prevent further global temperature rises, CO2 concentrations in the atmosphere must be stabilized at 450 to 550 ppm or lower (depending on the targets for individual policies).
2.
The red line shows the expectation GWP-weighted emissions will decrease if environmentally beneficial refrigerants are selected for particular applications. The red line has been added by Daikin Industries, Ltd. In 1987, the Montreal Protocol was adopted for the purpose of restricting the production, consumption and trade of particular substances in order to protect the ozone layer. CFCs, which had been used as refrigerants for air conditioning equipment, were completely abandoned. Furthermore, under the Montreal Protocol, HCFCs (alternative to CFCs) will be phased out almost entirely by 2020 in non-A5* countries and by 2030 in A5* countries.

HFCs have been used as alternative to HCFCs because of zero ODP value, however the GWP of HFCs had been considered to be a problem. With regards to GWP, in October 2016, the Montreal Protocol parties agreed to phase down HFCs in CO2 equivalent under the Kigali Amendment. The Kigali Amendment entered into force in January 2019.

*
Emerging countries are categorized as operating under Article 5 of the Montreal Protocol (Referred to as "Article 5 countries"). However, any country that was a non-Article 5 country in the original draft and later changed is excluded.

HCFC Phase Out and HFC Phase Down Schedule in Montreal Protocol 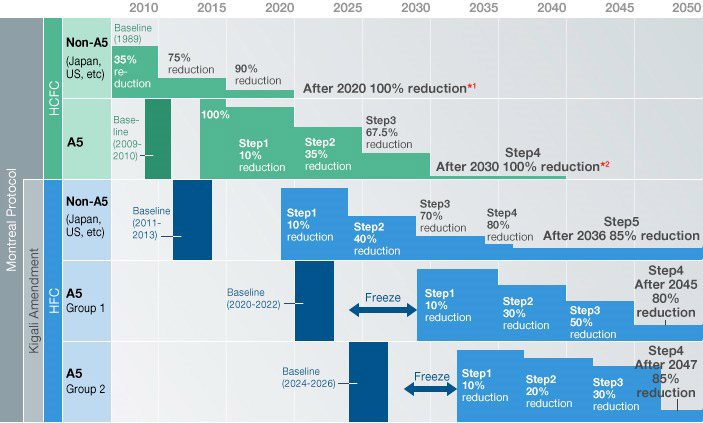 Daikin welcomes the Kigali Agreement for an HFC phase down in CO2 equivalent under the Montreal Protocol. To mitigate future global climate change, it is important to take a "Sooner, the Better" approach. Based on this idea, we will achieve this target by not only refrigerant conversion, but also by conducting comprehensive measures such as reducing refrigerant charge volume, reducing refrigerant leakage and promoting recovery/recycle of refrigerants.

Daikin's Policy on the Environmental Impact of the Refrigerant